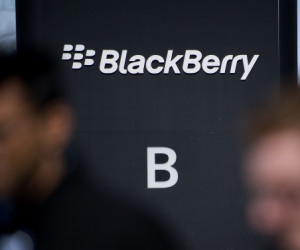 No one ever said BlackBerry Ltd.’s turnaround was going to be easy, but investors are starting to grow weary from waiting on better days after another earnings miss from the country’s beleaguered tech darling on Tuesday.

“The jury is still out,” Bob Sewell, chief executive at Bellwether Investment Management in Oakville, Ont., said. “We don’t currently own it, but it is such an iconic name in Canada you can’t help but follow it and continue to hope that it will survive.”

BlackBerry shares fell more than four per cent on Tuesday to US$8.81 in New York trading after the company reported a first-quarter earnings miss before the opening bell on markets.

The highlight of the quarter was the company’s strong software performance, which helped push the stock higher in pre-market trading, but an accelerated decline in services revenues combined with weaker hardware sales proved too much of a disappointment for investors.

“It appeared that the strong growth in software sales was going to give the stock price a lift, but hardware remains the big question mark,” Sewell said.

He believes there are encouraging signs of improvement at BlackBerry despite the miss and said CEO John Chen’s go-forward strategy appears to make sense — at least on the surface.

“Certainly their last three acquisitions are all consistent with building an enterprise platform focused on delivering secure voice and data, which is a fast growing segment in the tech sector and bound to accelerate further,” he said.

“This is a positive as too often we see tech companies making acquisitions that are difficult to understand relative to their business strategy and focus.”

But while Blackberry’s overhaul is making progress, that progress remains slow and a return to the company’s halcyon days continues to grow more unlikely by the day.

Sewell predicts the stock is likely to remain in the “penalty box” until they are executing on a viable, long-term business model.

“For investors already holding the stock I don’t see a lot of downside, but nor do I see many catalysts for significant upside near term which to me suggests there are better places to deploy capital,” he said.

Most analysts tend to agree with that assessment. Nineteen of the 32 who cover the stock have hold recommendations, while another nine suggest investors sell at this point in time.

“We consider BlackBerry a high-risk, potentially high-reward stock due to valuation and volatility,” said Amitabh Passi, a UBS analyst who maintained his neutral rating and US$10 price target.

Greg Newman, an associate portfolio manager at The Newman Group in Toronto, said he doesn’t own BlackBerry shares now nor does he anticipate owning them in the near future.

“I gave up at around US$19 some years back, he said. “After getting burned a few times before then, I have not looked back.”

While the company may still turn things around, the probability of such an outcome is not one that Newman is willing to wager on at this point, particularly since there are other, more attractive opportunities available to him.

“When a company continues to disappoint, at some point you just got to move on,” he said.