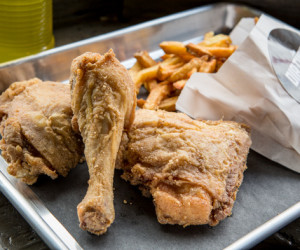 Fried chicken, be it Southern style, Asian style or even Toronto style, is hot right now on menus across this city. There's a lot of finger-licking fried chicken to be had, whether you like it by the bucket, with waffles, or as entree over mashed potatoes.

Here are my picks for the top new restaurants where you'll find fried chicken on the menu.

The Dirty Bird
Northern fried chicken dusted in maple sugar is specialty at this new fast food joint in Kensington Market. Order three pieces of bone-in chicken with fresh-made buttered waffles and a side for $14, or try the budget-friendly two-piece combo with a choice of fries, slaw or 'tater salad for $7.

McRamyun
This Baldwin Village eatery specializes in Korean ramen, but the Mc Chicken Wings ($5.45 for 3 pcs, $11.45 for 7pcs) coated in crispy crushed noodles is not to be missed. This take on KFC (Korean Fried Chicken, that is), is a house fave and comes accompanied by two sauces - a garlic mayo and a spicy gochujang for dipping.

Lucky Red
Deep-fried five spice coated fried chicken ($7) is served two pieces at a time at Banh Mi Boy's licensed spin-off in Chinatown. Douse it with the house hot sauce then rely on the sides of pickled kohlrabi and fennel to cool things down.

Kanpai
TFC, short for Taiwanese fried chicken is the main attraction at his Cabbagetown snack bar. Sprinkled with chilli peppers, cilantro and scallions, and served with chili hot sauce, a three-piece order of crispy bone-in chicken goes for $8, a while a bucket will set you back $19.

Old School
The Colonel's Bucket ($19) features boneless nuggets of juicy chicken in a crispy golden coating topped with knob of vanilla butter. Smother it with Tabasco honey and enjoy with sides of slaw, potato salad and a biscuit.

Concession Road
JFC, or Japanese fried chicken ($19.50) is on the menu at this St. Clair restaurant. The dish features Mennonite-farmed chicken marinated in sesame oil and sake before being crusted in cornmeal, deep fried, and served with a tomato and preserved lemon mayo over mashed potatoes with seasonal veg.

The Tennessee
The new Parkdale pub and live music venue serves up Tenny Fried Chicken ($13) featuring drumsticks marinated in a secret sauce then dredged and deep fried to a crisp. Every order includes a side of hush puppies, and organic greens to make it a meal.