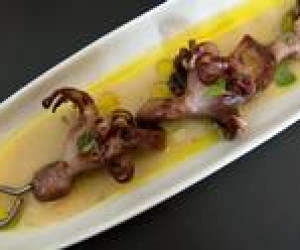 Hummus was transformed from a deli-aisle afterthought to a bona-fide, and yes, even decadent restaurant dish this year. “Middleterranean” became the most dominant dining trend of 2014, with nearly enough tahini, pomegranate, sumac and za’atar around town to rival the great Spanish and ramen crazes of 2013.

You could hardly go out in the last 12 months without being offered a barrel-aged negroni or wine on tap, while roasted cauliflower entered its second year as the single-most overused (and granted: pretty delicious) vegetable dish in town. And drinking water finally lost its hard-earned status as restaurant going’s most pernicious bill-padder, to be replaced by olives and bread, and the once-humble oyster on the halfshell. Of course we’ll have some oysters, you’d answer as you were seated; “market price” you’d later realize, is menu-speak for $3.50 a piece.

The level of cooking and the range of cuisines around Toronto continued their upward climb; the city got its first unequivocally excellent Indonesian restaurant this year, as well as a brilliant backwoods Southern Italian snack spot, while weird but tasty (and totally Toronto) hybrids like Chinese-Jamaican and Cantonese-Jewish also took off. The price of real estate became the most challenging issue for many restaurateurs; rents on prime downtown strips like King West have more than doubled in the last two years. The Grove, Yours Truly and Ursa – respected restaurants, all of them – closed, not even waiting until after the holiday rush, and a few fading downtown giants look close to toppling any day.

But the best news for diners was how many talented chefs and front-of-house types were still eager to test their ideas on a voracious city; even as I was nailing down the contenders for this year’s best list, the openings kept on accelerating, with new spots from the partners behind Bar Isabel, Buca and Oddseoul either just opened or about to, and highly promising launches from a few of the most interesting culinary talents in town. (I’ll be getting to them, soon.)

Chris Nuttall-Smith hosted an Ask Me Anything on Reddit Friday afternoon, answering questions on everything from dining trends, restaurant recommendations and food poisoning.