Venice by boat The Italian connection 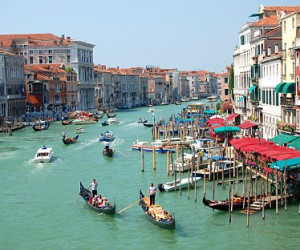 Venice, the city where there are no roads and no cars and the only mode of travel is by boat. Tourism flourishes in the city built on 118 islands dissected by canals and linked to each other by bridges. The whole area is a part of the marshy Venetian lagoon in Italy. The city is known for its stunning architecture and artwork and is a world heritage site.

Getting into the city

Most flights touch down at the Venice’s Marco Polo Airport. From hereyou can reach Piazzale Roma by road. This is the last motor-able road point and you move into Venice city by switching over to the Vaporetto or water bus. The water taxis take over next and charge you handsomely. To avoid them you can take the ferry straight to San Marco.

You can also move to Venice by cruise ships and ferries from Greece and Istria.

The Grand Canal which is more than 2 miles long carries the majority of the city traffic. It was once described as “the most beautiful street in the world,” and is now a water traffic corridor where you will find the famous gondolas and private boats ferrying the tourists. The canal takes you along the 170 buildings lining it and beneath 4 bridges including the Rialto Bridge that cross its path.

It is a central tourist attraction and the largest square in the city laid out right in front of St. Marks Basilica or the “Church of Gold.” The opulent church has its own bell tower, the Campanile. A beautiful Gothic structural marvel, the Doge’s Palace is just next to the square. It used to be the center of power in Venice from where the Doge and the government of Venice ruled the Venetian Republic.

Bridge of Sighs – the interesting story

At the beginning of the 17th century, a bridge was built across the river in order to connect the old prison interrogation room in Doge’s palace to the new one right across. The prisoners moving across the bridge sighed at the last view of the outside world before their execution. That gave the bridge its name. However, a romantic view was created by the poet Lord Byron and it says, “I stood in Venice on the Bridge of Sighs, a palace and prison on each hand.” The “sighs” are now said to come from lovers kissing on a gondola beneath the bridge at sunset, and getting overwhelmed by the romance of the whole scene.