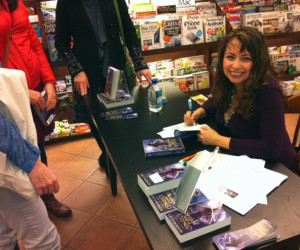 If you’re a new writer, you know that your book isn’t going to sell thanks to your name alone. If you’re JK Rowling, on the other hand, your book will sell just because your name’s on the cover! And as if that weren’t enough, big-name authors will get press coverage, radio and TV interviews, and newspaper articles. It all serves to boost their sales.

How can a new author hope to get attention from the general public? Do you have to leave your book mouldering in obscurity on a shelf somewhere and hope that by some miracle, it will get noticed? Not anymore!

Become a star (the easy way)!

You’ve probably heard how YouTube videos have gone viral, turning ordinary people like you into stars overnight. Could that work for you? After all, Justin Bieber started out by finding fame on YouTube. The simple answer to that question is a trifle discouraging. Unless you’ve got an established YouTube channel, and an existing following, your chance of making an impact with your online video are not all that good.

Ideally, you would want to appear on a YouTube channel that’s already well-established, with subscribers waiting for the latest release and pouncing on it the minute it goes live. They like it, they share it, and before you know it, you’ve become an overnight star.

Nobody understands this situation better than the author who started Agora Publishing, a self-publishing company established with the aim of making book publishing more effective and more profitable for writers than it has ever been before.

Instead of waiting for calls from journalists and reporters, hoping for radio or TV interviews, or contacting newspapers, magazines, radio stations and local TV channels in the hope that they’ll get in touch with you about your book (they usually don’t), writers have a new alternative.

A professionally conducted and perfectly filmed interview can be posted to Agora Publishing’s YouTube channel, and if you and your book sound interesting enough (this part’s up to you), people will be beating a path to their bookstore and demanding your book. You could even end up with an audience of millions! Talk about great marketing exposure…

It benefits readers too!

Readers will be able to get interesting background information about you and your book. And reading a book is always more intriguing when you understand the writer’s perspective. Readers who would have otherwise given your book the go-by simply because they have no idea who you are will discover just why they want your book and no other as their next big read.

Most writers just write their manuscript, get it published and hope for the best. The best way to market yourself? Definitely not! Well-known writers have their own blogs and web pages to keep their following interested, but if you don’t have a following yet, that’s not going to help you much. As for YouTube, this incredibly powerful media tool is arguably underused by writers.

Why not get the edge? Talk to Agora Publishing about marketing your book (YouTube interview included) and get your brainchild the publicity it deserves!