The top 5 Street Festivals in Toronto this Spring 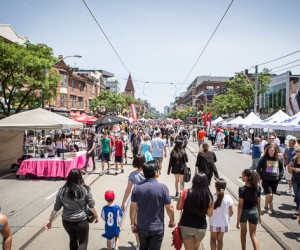 The top street festivals in Toronto this spring will have you partying on the streets of Kensington Market and gorging on pasta in Little Italy. In celebration of the warmer weather the city's neighbourhoods are hosting their annual sidewalk soirees, preparing us for the host of festivals that'll roll in as temperatures rise.

Here are my picks for the top street festivals in Toronto this spring.

Spring into Parkdale (May 7)
Street fests kick off on May 7 with Spring into Parkdale on the west side. The day-long event offers more than a few excuses to get outside, including sidewalk sale deals from local shops and restaurants as well as family-friendly attractions. Keep your eye on the Parkdale BIA page for news on road closures.

PS Kensington (May 29)
Pedestrian Sundays are returning to Kensington Market at the end of May. The street festival series will follow the same formula as year's past, continuing throughout the summer on the last Sunday of every month until October. Expect to find a host of street performers, food on sticks, vendors and more.

Dundas West Fest (June 11)
The Dundas West Fest is returning for its fourth instalment mid-June. Like last year, you can expect a busy festival with a healthy dose of beer and cheap eats on offer from local eateries and bars. Aside from food and drink, the fest promises a car-free day of comedy, dance lessons, live music and everything in between.

Junction Summer Solstice (June 18)
June 18 may not be the first day of summer, but the Junction is celebrating the impending season early (probably because the actual solstice lands on a Monday, and that's no day for partying). The day to night festival will showcase everything the neighbourhood has to offer, including street food, workshops, shows and more.

Taste of Little Italy (June 17-19)
If you've got a soft spot for Italian food, you'll want to explore College Street (from Bathurst to Shaw) on the weekend of June 17. You'll be able to get your hands on veal sandwiches, burgers, vegetables, grilled chicken, shrimp and more.

What did I miss? Add more spring street festivals to the comments.

Photo of Taste of Little Italy by Jesse Milns.